Aging is an inevitable natural process in all multicellular living beings. It is essential in maintaining the circle of life. However, some organisms age slower than others and also organisms within the same species have different rates of aging. In human beings, aging has been long thought to be associated with lifestyle and food habits. Nevertheless, aging is still a mystery. The molecular biology of aging is complex and remains largely un-comprehended. Scientists are in the process of unfolding the multifactorial cellular processes involved in aging.

Lately, Klotho (KL), a protein that has been linked to longevity, has sparked interest in many areas of research. Klotho over-expression has shown to increase lifespan in animal models by up to 30%. In humans, experiments show a decline in Klotho protein levels with age and in individuals with age-related diseases. Understanding the molecular mechanisms of Klotho might help decode the aging process. Klotho could also be a promising target for therapeutic interventions. An anti-aging drug might soon become a reality, adding more healthy years to your life.

Klotho was named after the Greek Goddess of fate, Clotho, who spun the thread of life. The gene was discovered by Kuro-o et al. in 1997. Mutations in the α-Klotho gene in mice lead to an early onset of phenotypes related to aging such as arteriosclerosis, infertility, osteoporosis and emphysema with an overall reduction in lifespan. Additionally, the overexpression of Klotho gene slowed down the symptoms of aging, resulting in an increased life span.

The Kl gene is highly conserved among species. The protein sequence is ~98% homologous in humans and mice. KL gene orthologs has also been identified in D rerio and C elegans. In humans, the KL gene is located on chromosome 13, whereas in rats it is on chromosome 12 and in mouse chromosome 5. The flanking genes are the same in all three species (Figure 1). 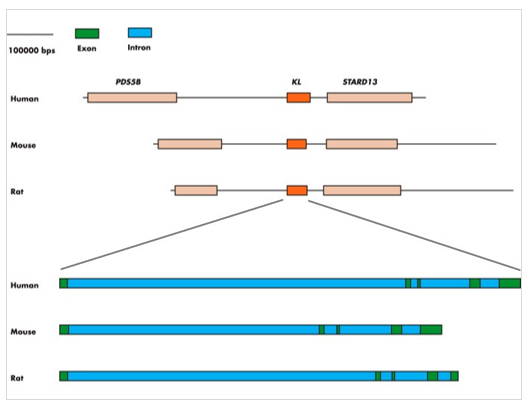 The KL gene has five exons that encodes a type 1 single-pass transmembrane glycoprotein. The KL gene in humans is translated into 3 proteins, α-Klotho, β-Klotho and the KL related protein (Klrp or γ-KL).

α-Klotho is the full length protein of 1012 amino acids localized in the cell membrane and Golgi apparatus. The membrane bound protein consists of two internal repeats termed mKL1 and mKL2 which form the extracellular domain. These motifs are similar to enzymes in glycoside hydrolase (GH) family 1.α-Klotho is expressed predominantly in the epithelial cells of the renal tubules. Apart from kidney, the α-KL gene expression has been observed in the brain choroid plexus and to a lesser extend in the placenta, pituitary gland, skeletal muscle, aorta, pancreas, testis, urinary bladder, ovary, colon and thyroid gland.

Like the α-KL, the β-Klotho also has two GH domains, KL1 and KL2 and is mainly expressed on the cell membrane of liver cells, gastro-intestinal tract, spleen, kidney and white adipose tissues. Klrp has only the KL1 domain and is a transmembrane protein that is known to bind to fibroblast growth factor receptors. Klrp is found to be expressed in adipose tissues, eyes and kidneys. 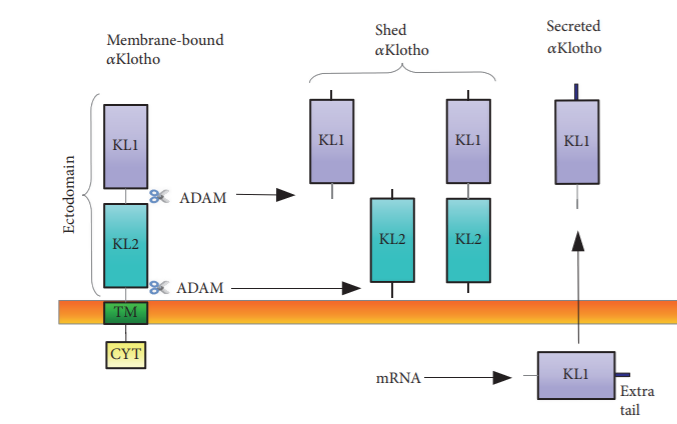 Moreover, secreted forms of α-Klotho has also been identified. Alternative splicing at the third exon forms a truncated transcript coding for 550 amino acids (~65kDa) which is the secreted protein (s-KL). Recent studies show the expression of s-KL in different regions of the brain suggesting their role in brain maturation and cognition. Besides alternative splicing, studies also reveal that metalloproteinases ADAM10 and ADAM17 can cleave the extracellular domain of the transmembrane producing the proteolyzed secreted form (p-KL). Proteinases can make two types of cleavages, α-cut (KL1+KL2, ~130 kDa) and β-cut (KL1 and KL2 form, ~65 kDa). The secreted forms of klotho has been detected blood, urine and cerebro-spinal fluid.

Klotho has been identified to play a direct or indirect role in multiple signalling pathways regulating various metabolic activities. Membrane klotho has been linked to regulation of mineral metabolism, oxidative stress and fibrosis whereas, the soluble forms of Klotho has shown endocrine, autocrine, and paracrine hormonal activities. Intracellular Klotho too has also shown significant metabolic regulation activities.

Klotho is also known to inhibit insulin/insulin-like growth factor by suppressing the downstream signalling pathway of the insulin receptor substrate (IRS) and the IGF-1 receptor (IGF-1R). However, Klotho has does not directly bind to these receptors, but is thought to regulate their activity through a class of transcription factors called forkhead-box proteins (FOXOs) and reduce oxidative stress.

IR and IGFR suppression prevents phosphorylation of FOXOs and hence they can enter the nucleus and bind to the promoters of antioxidant enzymes. This leads to transcription and up-regulation of enzymes like catalase and mitochondrial manganese-superoxide dismutase (SOD2), thereby eliminating reactive oxygen species (ROS) and conferring resistance to oxidative stress.

New studies have also shown that klotho can regulate growth hormone (GH) secretion and alter the GH/IGF-1 axis. Klotho deficiency has been associated with the growth abnormalities related to GH/IGF-1 axis.

In the kidney and parathyroid, Klotho can bind Na+-K+-ATPase on intracellular organelles. This creates a low intracellular Na+ concentration leading to trans-epithelial Ca2+ transport in these tissues.

Retinoic-acid-inducible gene-I (RIG-I) is known to mediate pro-inflammatory cytokines like IL6 and IL8 which has been linked to the aging. Recent studies show that intracellular Klotho can suppress to RIG-1 activity by binding to it and blocking its multimerization. This is suggestive of Klotho’s role in intracellular protection against inflammation and senescence.

Wnt signalling plays a role in stem cell proliferation and maintenance. The stimulation of Wnt signaling pathway prolongs the cell cycle resulting in exhaustion and depletion of stem cells, as well as up-regulation of fibrogenic cytokines. Multiple studies reported that the extracellular domain of Klotho can supress Wnt/β-catenin signalling pathway by binding to Wnt1, Wnt4 and Wnt7. Furthermore, α-Klotho causes the degradation of β-catenin by increasing μ-calpain activity.

Several in-vitro studies have demonstrated that klotho can slow down senescence in cell lines by inhibiting p53-mediated cell cycle arrest. Increased p53 causes the transcriptional activation of the cyclin dependent kinase (CDK) inhibitors such as p16 and p21 that leads to cell cycle arrest from G1 to S phase. Experiments by de-Oliveira et al., demonstrated that α-Klotho inhibition enhances the expression of p16, p21, p53 and the senescence-associated protein β-galactosidase. Another study by Ikushima et al. revealed that these in-vitro effects can be minimised by treating the cells with recombinant Klotho.

The secreted form of Klotho protein has been known to function as a circulating hormone. It can trigger and upregulate the second messenger cAMP which in turn activates the cAMP-dependent protein kinase A (PKA). This then leads to an increase in angiotensin I-converting enzyme (ACE), manganese-dependent superoxide dismutase (Mn-SOD) and Nitric oxide activities. Thus, klotho protein might be the key in maintaining the balance between reactive oxygen species (ROS) and antioxidant agents.

As we have seen, klotho can affect and regulate some of the major cellular signaling pathways that can advance senescence. Membrane α-Klotho has demonstrated direct protective action to its target organs. Whereas, s-KL can function as a circulating hormone that can confer an overall cellular protection in the body. Hence, klotho becomes a key target for therapeutic interventions in several age-related diseases. Intensive research is underway to delineate the exact role klotho in the onset and progression of a number of pathologies.

CKD is the long-term loss of kidney function that can affect the functioning of other organs. Reports have shown that decline in Klotho levels is associated with ion disorders, inflammation response, vascular calcification, mineral bone disorders and renal fibrosis in CKD. Hence, secreted klotho has also been proposed as an early diagnostic or prognostic biomarker for CKD. Further clinical and animal studies demonstrate that increasing klotho levels by supplementation of s-KL or endogenous up-regulation can improve the symptoms of CKD. Major research work also focuses on the treatment strategies using Klotho.

Neurodegenerative disorders like Alzhiemer’s, Parkinson’s and dementia is mainly seen in the old age. Since the aging-related protein Klotho is abundantly expressed in the brain, its direct effect on brain function has been an avid area of research. Studies in mouse models have revealed that Klotho can not only protect the brain from symptoms of cognitive decline but can also enhance cognitive functions in young mice that overexpress the protein. Humans over 60 years of age with KL gene polymorphism, was found to have higher cognitive ability compared to control. More research is in progress to untangle the complex interplays involved.

Evaluation of serum α-Klotho and β-Klotho levels in type 2 diabetic patients also showed a strong correlation between diabetic pathologies and low klotho expression as compared to the healthy controls. Thus, klotho is a strong candidate in diabetic therapy.

Tissue homeostasis is maintained by adult stem cells. With age, expression of certain tissue senescence markers like p16INK4A can gradually inhibit this self-repair mechanism. Osteoarthritis (OA) is characterized by the loss of cartilage homeostasis, synovial activation and sub-chondral bone remodelling. In a recent work by Chuchana et al., s-KL or secreted klotho was found impart cartilage integrity by repressing the NOS2 and ZIP8‐MMP13 catabolic axis. Articular chondrocytes were seen to locally express s-KL during early chondrogenesis which declined at the terminal differentiation stage.

However, reversal of collagenase-induced cartilage degeneration was observed via ectopic expression of secreted α-KL in joints, indicating its chondroprotective function.

The future of Klotho

By far, Klotho can be designated as an antigeronic protein/hormone. Accumulating evidence reiterates that klotho mediates cellular protection and improves cell survival. However, most of the research has been done on α-Klotho. The exact functions of other forms and the intricate signalling network is yet to be completely unravelled.

Rigorous work is on-going to develop therapeutic strategies for klotho. Only a deeper understanding of Klotho biology can justify therapeutic targeting. The pharmacokinetic and pharmacodynamic analysis, especially the effectiveness-risk window needs to be thoroughly validated before human trials can be done. Nevertheless, different therapeutic approaches like small molecule modulators of KL, recombinant KL protein and gene therapy are being studied. Recently, another longevity factor named growth differentiation factor-11 (GDF11) was identified which can act synergistically with klotho. Heterochronic parabiosis in young-old mice showed that systemic or local delivery of such longevity factors could be a promising line of treatment.

There are many pharmaceutical giants that have invested in klotho research. Klotho Therapeutics (KTI), is a biotechnology company that focuses on recombinant klotho development. Collaborations between pharma companies and academic institutes should be able to accelerate research to find the unknown answers.

In summation, Klotho research finding does promise an elixir of youth, a potential drug that can prevent as well as cure diseases ensuring a longer and healthier life.